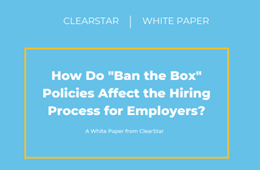 How Do "Ban the Box" Policies Affect the Hiring Process for Employers?

An estimated 70 million people in the United States – nearly one in three adults in America – have a prior arrest or conviction record and job applicants with a criminal record can have a harder time finding work than non-offenders. As a result, many states, counties, and cities have adopted “Ban the Box” policies to provide ex-offenders a fair chance at employment by removing criminal history questions from applications and delaying background checks until later in the hiring process.

The rationale behind “Ban the Box” is that an employer is more likely to objectively assess the relevance of an applicant’s arrest or conviction if it becomes known after the employer has learned about the applicant’s knowledge, skills, abilities, and qualifications for the job sought. The white paper “How Do ‘Ban the Box’ Policies Affect the Hiring Process for Employers?” shows how the “Ban the Box” process works and how many states, counties, and cities have adopted these policies.

Download "How Do 'Ban the Box' Policies Affect the Hiring Process for Employers?"